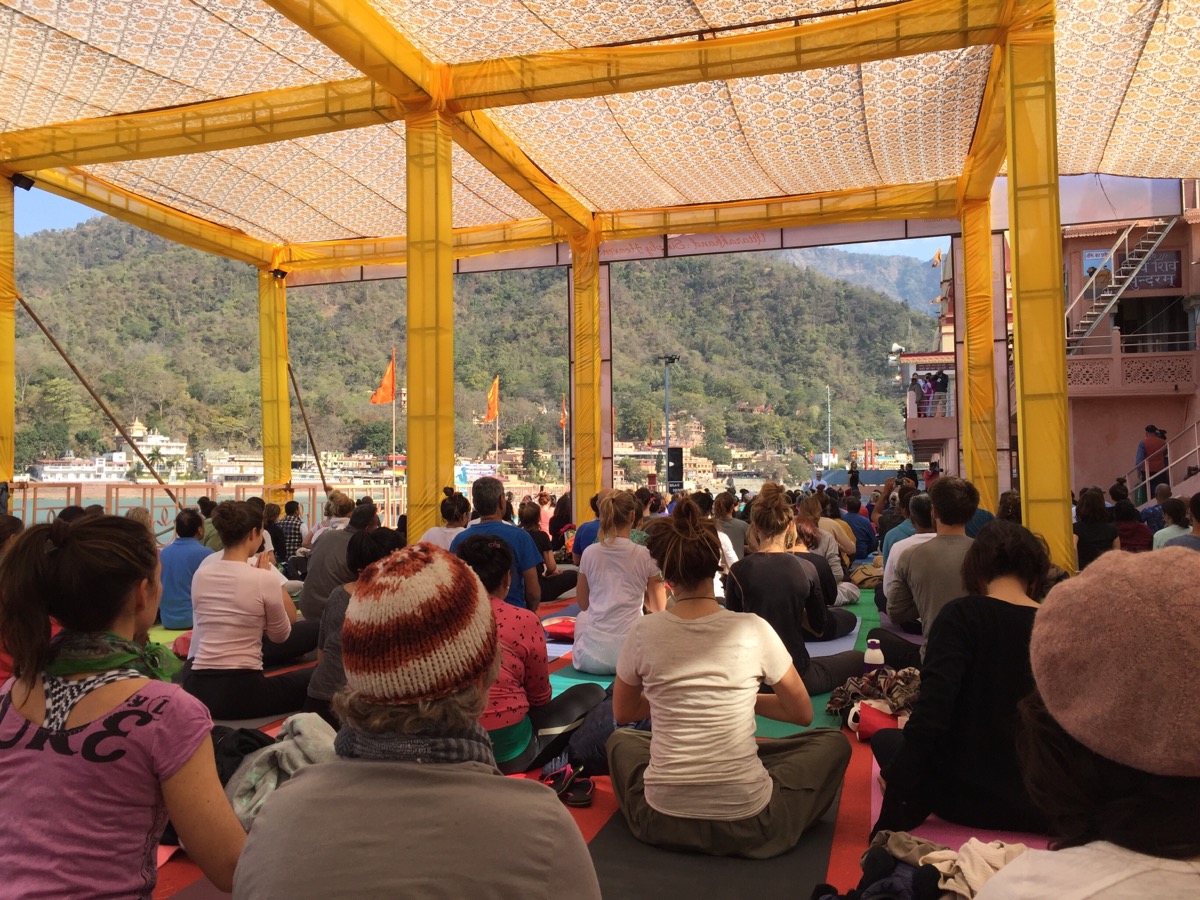 Posted at 07:12h in Newsletters by Linda Madani
2 Likes
Share

My first yoga classes fresh out of high school were in the Sivananda style. Sivananda Yoga is a classical and holistic approach to Hatha Yoga that has not been modified or watered down and is still taught the same way as Swami Sivananda taught in 1936. At the time the difficult positions were sirsasana (headstand) , bakasana (crane), mayurasana (peacock pose). The focus, if I remember well, was never on the acrobatic feats of the asana.

Since the mid-90s, I have immersed myself in the study of yoga. I have studied Iyengar, Bihar School of Yoga, Ashtanga, Vinyasa and Krishnamacharya.  I have lived a yogic lifestyle.  I’ve studied the principles of yoga and its history. I have explored many facets of yoga. I’ve read texts written by scholars, acharyas and saints and have learned Vedic chanting.  I have studied yoga therapy both in the West and India and am certified as an international yoga therapist.  I studied with a Balinese healer over 20 years.

My practice has always been about elevating myself, to make myself a better person and eventually, as a teacher, to inspire others to take care and love themselves.  Learning to take care of oneself and practicing with self-love is to understand that this physical body is not who we are but merely a tool given to us to do our work as we contribute to this world.  Yoga as I understand it connects with the divine within us.  Our biggest stumbling block is the unconscious mind.  I have found solace in the yogic texts which clearly state that a daily yogic practice will change the unconscious mind.  Yoga is meant to purify the body, the mind and the emotions that cloud a connection with the divine.

This year I went to Rishikesh Yoga Festival.  It was a most enjoyable experience, and I enjoyed many of the classes and lectures I attended. I was able to observe the melting pot of different types of yoga that have emerged during the last couple of decades.  Although all teachers were internationally renowned and some classes were excellent, others left me perplexed.

One young teacher said, “Move your freaking feet.”  Was I the only one who felt disrespected among the hundred participants in the class?  Would that be acceptable to say to a child or an employee?  He followed this by saying, “This is bad ass yoga.” I wondered what he meant by ‘bad ass yoga’.  After the class, I asked a participant whether she’d enjoyed it and she replied that she loved it.  I asked her what aspects she appreciated and she said, “The instructor motivated me to work harder and that made it a fun class”.  Some friends told me that this attitude was perhaps generational.

I researched that teacher and it turns out that he teaches what he calls ‘hip-hop yoga’ in a disadvantaged community in New York.  In an interview, he said that he couldn’t use Krishna Das’ music with these communities, so he uses hip-hop music.

Still, I can’t help but notice the irony. Here we were on the banks of the Ganga — worshiped as the goddess Ganga by Hindus and a most sacred river beside which sages and ancient seers have practiced — and we were being taught a yoga that caters for the inhabitants of the Bronx in New York.  We were not being transmitted a piece of knowledge that comes from ancient times, but a yoga that has been diluted and adapted for the Bronx dwellers of New York.

I went to another class with an Indian teacher and he kept saying, “Don’t bend your knees; if you bend your knees you will not to stretch your hamstrings, you will only stretch your quadriceps.”   About 50% to 60% of people will experience back pain in their lives. Many people suffer from intervertebral disc disease.  Before age 40 approximately 25% of individuals show evidence of disc degeneration.  Beyond age 40, more than 60% of people show signs of disc degeneration.  To protect the lower back it is highly recommended in forward bending past 90° to bend the knees, or at least micro-bend the knees. There were several hundred people in this class and the majority was young, but I am still pretty sure that between 20 to 25 % of the participants were at risk.   No caution was ever given.

Another common injury among yoga practitioners is at the attachment of the hamstring to the sitting bones. It takes at least three months to heal a minor hamstring injury. Some people may need six months or up to a year and even longer in some cases to fully recover. It can be a serious condition.  I believe that it is safer to recommend to the student who has sore and painful hamstrings to bend their knees.  Once again, we can assume among the hundreds of people there that a large number of people had potential hamstring injuries.

I went to another class where the teacher made us practice pumping breath for an hour and a half.  This class was also attended by several hundred students. This kind of breathing is dangerous for people with heart disease, hernia and high blood pressure.  Again no cautions were given; instead the instructor kept telling us, “Don’t stop, you can do it”.

In this day and age I find that a lot of yoga practitioners get stuck in the body.  The focus is very often on the achievement of the asana and flexibility is too often praised.  Nowadays the practice of yoga is mostly focused on asana and has become about controlling, while yoga is actually about letting go and relinquishing control.

Instructions on how to practice yoga have been replaced by practices that cater to the comfort zones of the practitioner and keep them in the illusion of being connected, because they have a feeling of belonging to a tribe.  Most people are disconnected.

Yoga is like a prayer, and this prayer is practiced with reverence to a power that is bigger than us, and each of us should practice with respect to our body.  It is a privilege to have an able body.   Yoga does not only purify the body but also maintains good health so that you can live a long life.

I am proud to say that hundreds of teachers have trained with me since 2011 and they were all given tools to connect to a power bigger than they were.  They also learned the essential knowledge of how to protect their students and create a non-competitive environment.

The heart in Sanskrit is ‘hri’ which can be translated as the mind.  Ancient yogis believed the pure mind was located in the heart. We need to move our awareness to the heart center and stay away from the fluctuation of the mind.

Observing our emotional landscape from a distance allows us not to become involved in the drama of life.  It makes it possible to see that perhaps emotions are not necessarily the reality.  It doesn’t mean that the emotions are not there, but it means that they can be observed while not letting them control us.  This is very different from being in denial or being disconnected.  When practicing detached awareness, we can see the whole picture.

We need to train our minds to be able to do this.  Yoga offers many techniques to direct our focus to the peace that resides within us.

As Ram Das says, “Everything changes once we identify with being the witness to the story instead of the actor in it.”